2 years ago, Phoenix based pop punk band, The Maine, curated 8123 Fest in celebration of their 10-year anniversary.

From January 18-20, the second festival was held and this one proved to be bigger and better than the last.

Back in December, I had the opportunity to speak with Pat Kirch, drummer and founding member, about what was in store for the festival.

During the interview, some of the highlights he mentioned included album-themed photo booths, specialty drinks, and a performance of the band’s debut album, “Can’t Stop Won’t Stop,” in its entirety. 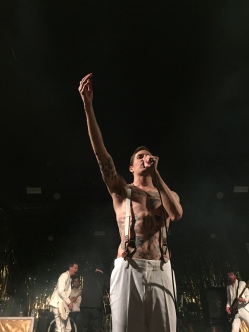 The festival began on January 18 with a concert at the Van Buren in Downtown Phoenix. The Maine played a set-list created by the fans, for the fans. The venue was packed and the mood was energetic. Fans were excited to hear staple songs, like “Run” and “Black Butterflies & Deja Vu,” and also delighted to hear B-sides, such as “Vanilla.”

The festivities continued on January 19 when the main event took place in the Civic Space Park. The park was transformed into a festival space with two stages, food trucks, and various vendors and sponsors. The “Maine” stage featured bands Teenage Wrist, This Century (making their first live appearance since 2017 at the first 8123Fest), The Technicolors, Real Friends, We the Kings, Mayday Parade, and of course, The Maine. On the other side of the park, the Desert Stage included artists like Sundressed and Mikey Carnevale.

8123 Family from all over, coming far and wide from Brazil, England and more, united for this special occasion The Maine had spent years preparing. The two year gap between the first festival to the second proved beneficial as the band was able to upsize the venue and prep different activities for fans.

Around 7:30 p.m., The Maine took the stage and the whole park erupted in cheers and shouts. Not a single lyric was missed by fans, and crowd-surfers brought life to the atmosphere. I can say I did get a decent work out having to lift up what felt like hundreds of people over a steel barricade. There were laughs, tears, and even a poor singing attempt when John O’Callaghan, lead singer, handed me the microphone to sing (and I am still freaking out this happened in the first place, but he said I did a good job). Other than “Can’t Stop Won’t Stop”, The Maine played fan-favorites and their newest single, “Numb Without You.”

The night continued on with two after-parties, one at the Van Buren and an over 21 event at the Crescent Ballroom. The Make America Emo Again Afterparty saw an appearance from Jack Barakat of All Time Low.

The festival came to a close on January 20 with a free meet-and-greet with The Maine in the Civic Space Park from 1-3 p.m. The day wrapped up with a concert at the Crescent Ballroom, where This Century played “Sound Of Fire” in its entirety.

Although 8123 Fest was created with The Maine fans in mind, its message spreads to all fans of pop punk. 8123 Fest brought all those kids together to come and enjoy the music they love and will continue to for as long as pop punk and The Maine exists.