Extra! Extra! The musical Newsies, inspired by Disney, with a Tony Award-winning score by Alan Menken and choreography by Broadway legend James Kinney, is at Phoenix Theatre in Arizona until Dec. 31. And you definitely want to read all about it!

The energized performance can best be put into words by the love interest of the show, Katherine, played by Emilie Doering, who says they are a “ragtag gang of ragamuffins who want to take on the King of New York.” 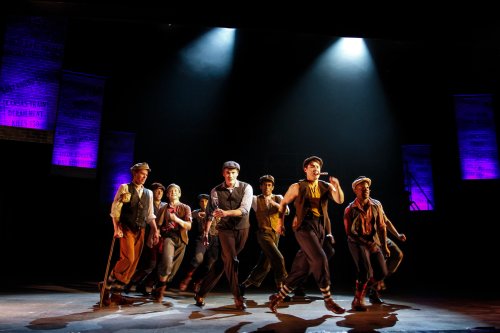 Newsies is an amusing and comical yet empowering musical about the real-life Newsboys fighting for their right to fair treatment and equal pay in a time when it seemed like there was no voice for the little people.

“One of the beautiful things about this show is that it’s an underdog story because you have the boys who have absolutely nothing,” said James D. Gish who plays the leader of the ragtag group Jack Kelly.

“They have taught myself and the audience that no matter where you come from, you can accomplish anything if you are willing to work for it. It will mean sacrificing it and blood, sweat and tears but that’s sometimes what it takes.”

Gish is no stranger to the stage nor the Phoenix Theatre. He has performed in many
productions and even released his own EP recently called “So In Love.” In his hectic schedule, I just had to ask how many hours a week did they exactly practice for this show? 50 hours a week–and the work they put in showed. However, it was also easy to tell they had so much natural chemistry together. 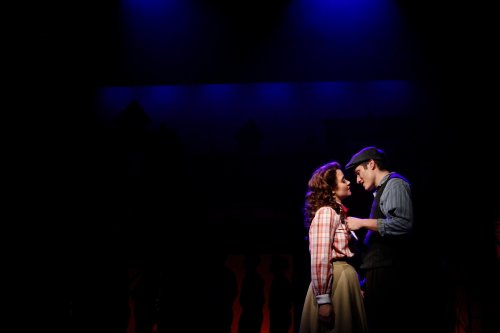 “It’s like a frat party every night. During practice, our director [Michael Barnard] and our stage manager were about to blow a gasket 90 percent of the time because we were so loud. But we can all relate to the same things and we really do feel like brothers,” said Gish.

The Phoenix Theatre company spent a lot of time auditioning the dancers who made up the mostly male cast. These dancers were just as smooth selling the newspaper as they were light on their feet. My favorite dance number had them dancing on top of newspapers and sliding across the stage.

I found myself in awe as the boys sang the hit song “The World Will Know.” It is as passionate and enthralling as it should be, as it is the power ballad that really signals the turning of the show. The audience was clapping along and seemed to be rooting for the boys just as much as I was.

“[Michael Barnard] has really learned that Disney has these shows down to a formula, and it’s that no beat is less important than any other and every scene starts here and it just ramps up to the song,” said Gish. “During ‘The World Will Know,’ it’s like an army is forming and all of these young men are rising up to this cause.”

In the same song, one lyric says, “What we do today will be tomorrow news.” That line I think sets the tone for the rest of the show: to uplift and inspire the audience and prove what can happen when you challenge the norm–add a little tap dancing in there too.

Editor’s Note: The reporter, Lauren Bukoskey, initially spelled the choreographer’s name James Kimmey. We have changed his last name to the correct spelling of Kinney.