It’s really tempting to want to pack it up and leave all responsibilities behind, but with a little preparation, finals can go a lot smoother than expected. Students often forgo their own healthy habits to cram for tests.

Professor Jamie Valderrama is in charge of the Stress Management courses at Arizona State University and said the goal is to have her students leave the class with tools to live a happier, more responsive life.

“All of our data shows that when students leave the course, their stress levels are the same (which is awesome because we are not pretending that stress goes away – stress is a part of life) but their happiness levels increase because they now understand that they have the power to control how they handle stressful triggers and thus their behavior in both their personal and professional lives,” she said.

Valderrama defined stress as the experience of a perceived threat (real or imagined) to one’s mental, physical or spiritual well-being, resulting from a series of physiological responses and adaptations which can potentially make your body respond physically for example suddenly becoming ill, racing heart or sweaty hands.

The key to suppressing stress in a healthy way is pinpointing troubles, and this goes for scholastics too.

On the West Coast, University of Washington’s Cellular Molecular and Developmental Biology Sophomore Colton Merdich, said his finals study routine starts with a study session at the library and picking up a coffee for some motivation.

“Aside from the library, start hardcore studying for that specific finals a few weeks before the syllabus says,” Merdich said. “Take advantage of office hours and the resources there first to see what you understand, and if it’s getting too close, YouTube crash course videos are your friend.”

While some prefer chose the “all-nighter” method before a test, where one studies all night in hopes becoming Jimmy Neutron or retaining a semester worth of information, Valderrama says this is the optimal example of counter-productivity.

“My advice is to pay attention to your body and keep it in its responsive mode or
parasympathetic nervous system as often as you can which means practicing healthy habits like getting enough sleep, exercising, and good nutrition,” said Valderrama. “When the body is stressed [like that] the nervous system switches to its fight or flight mode.”

When in this mode, she said, the cognitive center of the brain is less efficient because the body focuses on immediate survival by getting away from the threat and is not able to accurately answer critical thinking questions. The body also puts the immune system and digestive system on the back burner during this time because these are not systems that are needed for immediate survival. 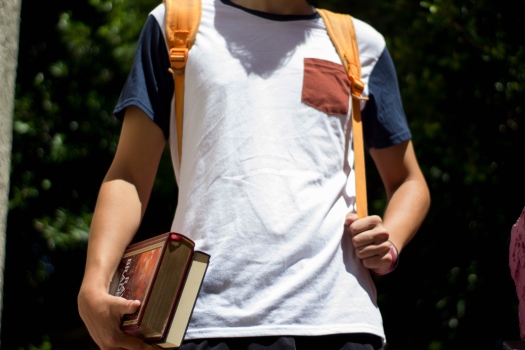 “Literally, saying that you will forgo healthy habits for good grades is completely
counterproductive because it is the unhealthy habits that set the student up for failure
academically,” she said.

A study out of Harvard showed that the average person is lost in thought, either ruminating or projecting, 47% of the day.

Tony Taitano, a Chemistry and Art History Freshman at the Amherst College in Massachusetts said a way to quickly lessen the worry of daily tasks by investing a little extra time on a calendar.

“It’s so easy to say you’ll ‘remember it later’ when you’re in a class and then you wake up in a cold sweat at 11:58pm because you forgot an assignment,” said Taitano. “This is so important, just write it down and treat your agenda as if it were your child—don’t forget it anywhere.”

A method they all agreed on was a game-day mentality for the final. The night before should be a good night’s rest above anything, and the day of should be productive and positive.

“Brush up, grab a bite, listen to your hype playlist, and if you don’t have one, make one,” said Merdich.

So maybe putting on that lucky pair of socks, keeping an extra $5 to treat yourself later or catching up on extra sleep doesn’t just make you feel good, self-care can increase positivity and turn a day around. Do what makes you feel centered, makes you feel, look or be your best because ultimately, the final grade reflects the time you dedicate to yourself.

How do you prep for finals? Let us know in the comments!