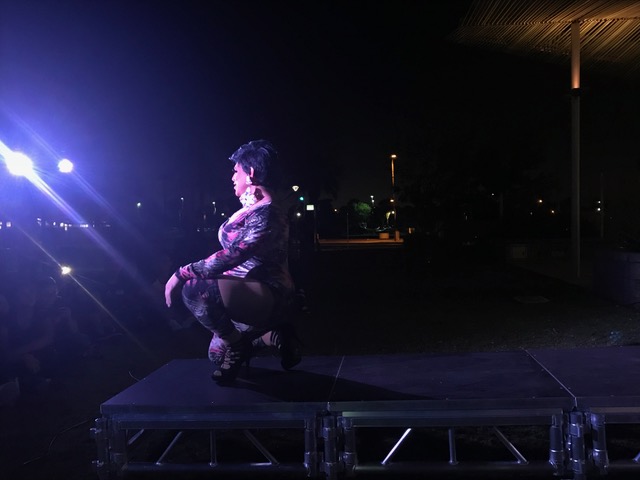 The week started out on National Coming Out Day on Oct. 11 with the “Out and About Barbecue” on the Downtown Phoenix Campus. The event had free food and games which led to a drag show later that night in Civic Space Park.

The show gained a large audience of supporters of all genders, pronouns and sexualities.

Rafael Gabriel Esquer, a staff member with ASU student engagement and advisor for the Downtown campus lesbian, gay, bisexual, transgender (LGBT) organization, Confetti, was one of the members responsible for putting on the show.

“Everyone who showed up was very supportive. They were all about being there, not only for the free food, which is a good incentive,” Esquer said. “But they seemed to really be open and willing to learn more about what it means to have a National Coming Out Day.”

As a part of the LGBT community himself, Esquer recognizes the importance of educating the university of the culture, history and politics. Esquer is currently helping the newly formed student group Confetti with the logistics of planning events to help inform students.

Confetti joined the Rainbow Coalition this semester, which is a huge step in advocating and educating for the community. The drag show was one of the events Confetti has had a large role in setting up and advertising for.

“Confetti is brand new but they are breaking all the barriers and trying to be as inclusive, educational and fun as they can be –  the name itself says a lot,” Esquer said.

Gabriella Poetzl, a managing intern with the Sun Devil Fitness Complex Downtown, is hoping to make the show an annual event. She emphasized how valuable it is to be accepting of everyone, especially in the current political climate.

“This is a part of wellness, your mental wellbeing and health and really taking care of and owning who you are inside goes a long way for how you function as a human being,” Poetzl said.

Poetzl worked in a behavioral agency before her current position with ASU and believes that not accepting yourself can be damaging internally.

“Part of that too is your identity, knowing who you are,” Poetzl said.

Poetzl also mentioned that the Dean of Students on the West Campus, Sharon Smith, was very impressed with the show and the enthusiasm of the crowd.

The performers were very pleased with the turn out as well. They all knew each other, which made the environment fun and lighthearted.

ASU is very involved with the LGBT community and had an event planned for every day of pride week. Events ranged from “Queer & A Sex Talk” to movie screenings and concluded with the Rainbow Festival.

Joy Arnold, an ASU student who attended the free movie screening of Mean Girls, thinks that ASU should continue to celebrate different cultures.

“I think it’s a cool way to meet other people and help people be more aware of the community,” Arnold said.