In the midst of the chaos, all I saw were overalls, succulents and DIY trinkets. It was a Pinterest lover’s dream.

The Phoenix Flea Market took place on Mar. 4 along Seventh Street and Monroe, near the Rosson House. Though the weather was a bit toasty, it finally began to feel like spring in the desert…I could tell it was time for me to pull out my sandals!

I’ve lived in Arizona for quite some time now and never attended this unique gathering. The charming photos of its Instagram were as close as I got…and I must say, it was even more adorable in person.

Now that I live Downtown, I simply had no excuse for not going.

From the moment I walked in, I knew my wallet was in for some trouble. I didn’t know where to look; every booth was as aesthetically pleasing as the next. Vendors were selling all kinds of goods, from flowers and accessories to décor and tasty tea.

Though there were hundreds of people crowding the small city block, my day of strolling around and “window shopping” was the most relaxing I’ve had in a while.

One of my favorite parts was observing the Phoenix Flea fashion scene. I would describe it as bohemian and hipster. While many ladies wore felt, floppy hats, off-the-shoulder tops and ankle boots, several men rocked denim button-ups, dark wash jeans and thick frame glasses. 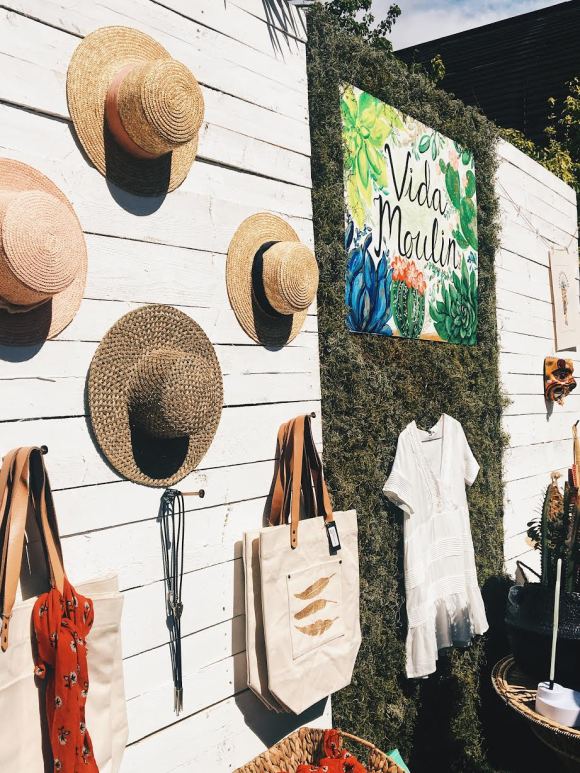 After seeing what the vendors had to offer, I introduced myself to a few to learn more about their local AZ concepts. Candi White of White Five Designs was the first owner I met. Her booth consisted of handmade wood signs and vintage décor…talk about adorable. Ms. White has been apart of this event since day one.

“I like the community, I like the venue, I like that there are returning customers throughout the years. It’s an all-around cool place. The other vendors are genuinely nice people and it’s not super competitive, it’s fun,” she said.

This was definitely one of my favorite booths due to the inspirational sayings on many of the signs, such as “small steps turn into miles.” I also adored the wooden wall accessories – I even snagged one for next year’s dorm.

The Local Stem was another booth to pique my interest. Who could resist this bright, yellow truck adorned with greenery and yarn art? 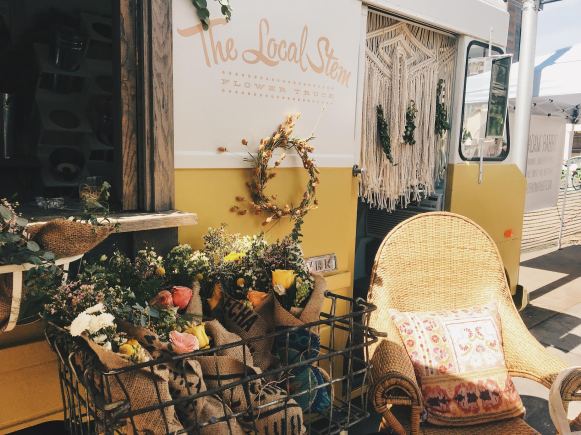 This business is run by mother-daughter duo, Amy and Hannah Conkright. They are expert flower arrangers, and their signature is wrapping products in burlap and twine. Though this is only the booth’s second time at the market, it was evidently a crowd favorite.

“I love getting to work with my mom and seeing everybody’s cool, creative ideas,” said daughter, Hannah.

Brendan McCaskey’s Jar of Buttons was one of the market’s most fun and creative booths. He sold a variety of knick knacks, including buttons, magnets and stickers. What made this concept unique was the fact that each item was labeled with a pun. As a sucker for cheesy jokes, I obviously spent a good chunk of my time rummaging to find my favorites, such as “love you a latte.” 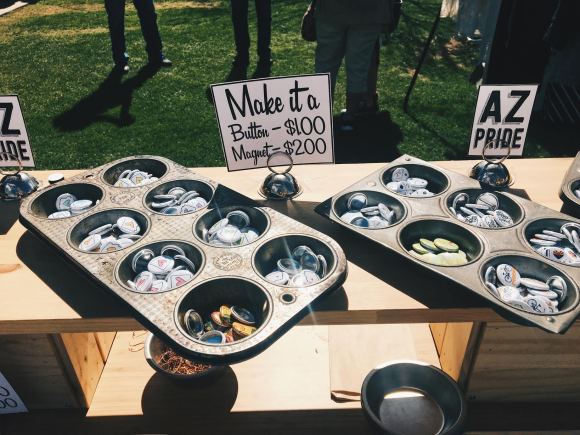 “I get to interact with people and share the things I make and the things I find humorous and cool. It’s just fun when people appreciate the same too and express that,” stated McCaskey.

Don’t be like me and wait so long to attend this amazing event, I promise you won’t be disappointed. It’s only hosted in the fall and spring of each year, so be on the lookout come November 2017.