The baggy clothes era has stumbled its way out of the mainstream and has given rise to a slimmer and much more tailored look when it comes to men’s street style.

The baggy clothing trend, which gained traction in the streets of Los Angeles in the late 70s, originally started in the prison system due to inmates using the fasteners in their uniforms to attack other inmates; leading to the baggy appearance of the clothing.

The style spilled onto the streets once these inmates got out of prison and back to their neighborhoods and was made evermore popular by the rise in rap music in the early 80s. 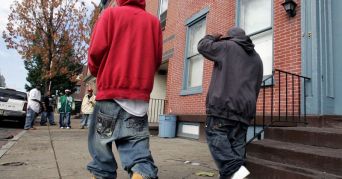 The style was of used by rap groups like N.W.A, Wu-Tang Clan and others throughout the 80s and 90s, which made it extremely popular among minorities and youth alike. Brands like JNCO, Levi’s and Guess soon caught on and rolled out looser versions of their jeans and pants.

Musicians and street style enthusiasts continued the trend, testing the boundaries of baggy and indecent exposure. It reached its climax in the late 2000s and fashionistas and musicians slowly began to pull up their pants and buy shirts of the proper size.

Soon enough, fashion-forward artists like Travis Scott and Kanye West traded in their baggy jeans and sports jerseys for skinny jeans and “slim” fitting shirts. Fans and fashion experts were quick to jump on board to this trend, citing the clean and streamlined look of tighter fitting clothing, which accentuated the physique.

Currently, is seems like the slim look hasn’t gone away and will likely stay for a while. Students around campus can be seen wearing tapered and slim sweats, slim V-necks and skinny jeans. This look lends a bit of tidiness to the baggy clothes of the previous decade.

Streetwear brands like Levi’s, Adidas, Nike and many others have taken to this refinement and made “tight” a principal characteristic of their collections.