Most 21-year-olds don’t list booking a Sports Illustrated photoshoot, walking a Victoria’s Secret runway, or working with Alexander McQueen when thinking about their goals.

This is the reality for Christa Sandstrom, a model making a name for herself in the fashion industry both stateside and internationally.

Sandstrom is based out of Gilbert, Arizona, but she’s jet-setted all around the globe, and she credits her experiences overseas as some of the most crucial in her career.

“The most amazing moment was getting the Glamour beauty editorial when I was in Milan, Italy,” she said. “It was honestly a surreal moment. I remember the exact place and time I got the message from my agent, showing up, being surrounded by a top-of- the-line team, preparing me for the shoot… That was definitely my call-home-crying moment that I felt I had really made it as a model.”

Oh yeah, and going to Milan? She was only 19 years old.

“It really made me realize I wanted to make the most of the opportunity,” she said of her travels to Italy at such a young age. “I didn’t really anticipate what I was getting myself into, going into a different country all alone at that age.”

Sandstrom said that although going abroad was a bit of a culture shock, it helped her appreciate her chance to be in the modeling industry. “It really opened my eyes and made me realize I was doing what I loved at such a young age,” she said. “And I felt so lucky to be doing that.”

Sandstrom, with her 5’11” frame and long blonde hair, has graced the cover of Mainstream magazine and appeared in several other publications including Runway. She has appeared on Good Morning Arizona and in a music video by Roseblack and Dreamer, an Arizona-based indie band. 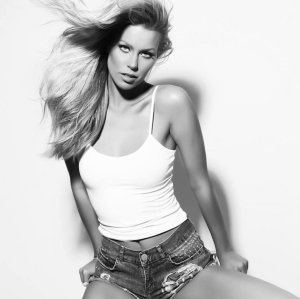 The biography on her website, christasandstrom.com, describes her ability to “effortlessly go from a dramatic glamour shoot to a fun and flirty bikini setting.” For her photoshoots, Sandstrom has donned pink hair, printed bikinis, studded dresses and denim cutoffs. But her personal style includes a lot of neutrals. “My style consists of mostly blacks and grays,” she said. “A bit edgy, but well put- together.”

Also essential to Sandstrom’s identity? Her personality and ability to be well-rounded.

“She has the unique ability to not take herself or modeling too seriously,” said mother Cathryn Sandstrom. “She has for many years downplayed the fact that she is a model. She doesn’t outwardly try to make that her identity.”

While she said she is always proud of her daughter, she names a particular fashion show as the most incredible moment. “It was for Pineda Covalin during the the [2007] Scottsdale Fashion Week,” she said. “She was only 14 years old. In that show, she had to wear a flowing long dress with sleeves that were way wide and then carry two poles that helped make the sleeves stand out, and almost looked like wings as she twirled on the runway.” She said that her daughter was nervous to carry off such a difficult part of the show, but that she executed it flawlessly.

Sandstrom said she always tries to stay professional and take care of herself. “Waking up and going to the gym always to be number one,” she said of her daily routine. “Usually if I have a shoot, I arrive with clear hair, no makeup. I try to prepare the night before. And most importantly, keeping a positive outlook is key to succeeding as a model.”

Her other advice for aspiring models? Stay educated on the industry. “Do your research, do your homework,” she said. “Always understand that it takes a lot. It’s never gonna be easy.”

Optimism is also a large part of her belief system.

“I always hold on to and believe in my dream,” Sandstrom said. “It’s something I’ll never give up and I think it’s important to be consistent in what you believe and what you want… I can handle rejection. It’s something you’re always gonna hear. If someone doesn’t want you, there’s always someone who does.”

Several people in the industry have praised the work of Sandstrom, who is currently signed with FORD/Robert Black Agency, a Scottsdale-based modeling and talent agency.

Stylist Jackie Marin held up a magazine at a press conference at Phoenix Fashion Week’s Spring Into Style show in March, spotlighting a photoshoot featuring the model. “Working with Christa was a refreshing experience,” Marin said of the shoot. “She knows her angles and best features. Not many models know how to work in front of a camera, but this lady knows how to bring high fashion.”

Sandstrom’s business manager Chris Cashak has high hopes for the model. “Everyone in Arizona, whether working in the fashion business or not, should cheer for her all the way to the top,” he said.