Coming from a prominent family in the entertainment business, Kendall Jenner has been in the public eye her whole life. She appeared on “Keeping up with the Kardashians” in 2007 and now she is seen all over the pages of magazines and walking down the runways. This year Time magazine’s 25 Most Influential Teens included Kendall (along with her sister Kylie) and recognized her for her modeling career. “To be honest, this is exactly what I wanted to be,” said Kendall during a Q&A with Interview magazine.”I was always looking up to supermodels.” To prove her commitment, she dropped her last name for her modeling career. “She’s a real professional. I love that her card just says Kendall,” Michael Kors told E! News. “So she’s not trading her name and I think she’s going to have a great career.” 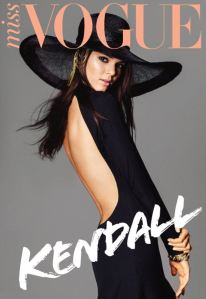 In 2011, she landed her first official campaign for Forever 21, and then in 2012, Kendall was the third Miss Vogue cover girl for the Vogue Australia issue. That was just the start. She caught the eyes of many in the fashion world and began working with high-end designers. Her first Fashion Week debut was in Spring 2014. She walked for Marc Jacobs in New York, Giles in London, and Chanel, Chanel Haute Couture and Givenchy in Paris. In September, she walked for Marc Jacobs, Tommy Hilfiger and Diane Von Fürstenberg in New York, Ports 1961, Fendi, Dolce and Gabbana, Emilio Pucci, and Bottega Veneta in Milan, and Balmain and Chanel in Paris.

Along with modeling, Kendall has a clothing line with her sister that is featured in PacSun. Kendall and Kylie have also been working with Steve Madden and launched a Madden Girl collection. Rumor has it she might be this year’s Victoria’s Secret Angel. “People think that this [success] just came to me. But it didn’t. What I have has almost worked against me,” She stated in an interview with LOVE magazine. “I had to work even harder to get where I wanted because people didn’t take me seriously as a model.” Although many argue she is where she is because of her family, Kendall has proven herself in the fashion world and her success will only continue.