45 years ago, the predecessor to Coachella, Lollapalooza and Firefly took place in Bethel, New York. The event, of course, was Woodstock, a three-day musical festival that influenced music, culture, the essence of the sixties—and even fashion.

If you assume that the aesthetic of the festival was bohemian and hippie due to the time period, you would be correct.

Like the music featured, many of the fashions found at the festival still hold relevance today, in both explicit trends and influence.

Below, take a look at some of the fashions found both at the festival and on members of this current era. 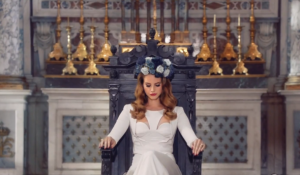 Photo Courtesy of My Favorite’s Guter

Flower crowns aren’t only associated with Woodstock, but the ’60s in general. While many sixties trends are making a comeback, flower crowns have been prevalent currently. From Lana Del Rey to multiple Pinterest tutorials, daisies, sunflowers and roses have been seen gracing strands of hair.

Okay, so I may never be as talented as Jimi Hendrix, but I can appropriate his cover-up. Especially for the fall fashion season, bohemian cover-ups have been making a comeback. Living in a hot climate, this is a fashion trend I can get behind, seeing as it is too hot for a full on cover-up.

Forever 21 offers a great selection of these. I think my favorite thing about these is the versatility they bring to any outfit. It’s also a trend that I have seen on campus worn by my peers instead of just in a magazine.

Separate from any of the fashion trends, certain looks and genres are also currently seen on campus, in malls and in many Instagram posts. 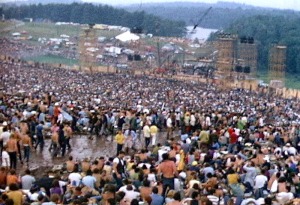 It would be easy to take every single element from Woodstock outfits and make them their own category, but it all fits under the Woodstock aesthetic, which can be interchangeable with the late-sixties look.

You can find a lot of this stuff at Urban Outfitters, Rue 21 (which ALWAYS has the best sales), Charming Charlie’s and a lot of other stores.

Being simple and slaying it

Photo Courtesy of This Era

I don’t want to turn this into a debate on Normcore, but I guess I have to talk about Normcore if this is a point that’s being made about simplicity in fashion.

I know every decade has their looks that define the generation, but sometimes people wear basic clothes that are not representative of the generation as a whole.

Take Crosby, Stills, Nash and Young, who compared to some of the other acts, dressed as bare as their acoustic set. This isn’t an explicit influence, but I love the KISS theory when applied to fashion. Sometimes, the subtlest can be the greatest.

You can buy these things everywhere and any time period in any city.

Other things Woodstock did for fashion

Cultural Bonds: Woodstock brought together diverse groups from Jefferson Airplane to Sha Na Na. There were solo acts sharing the bill with bands. There were performers and audiences of every shape, size and color. This diversity is found in fashion as well. It’s fun to mix and match.

Woodstock: The festival itself became an icon for fashion. The logo is now found on T-shirts and is a statement within itself.

Festival Dressing: Face it, how many Pinterest boards or articles do you see detailing music festival dress? Woodstock was one of the first major music festivals, and definitely one noted for its style. It brought together the idea for a festival, and in turn, the fashion associated with it.

Here’s a spooky fall moodboard for your Saturday⚰️🍂🍷🌛Looking for some fun fall activities to do in Phoenix this weekend? Then make sure to check out @jordan_mclain’s story on our blog for some ✨haunted✨ suggestions, such as @fearfarmphoenix!
@sacredheartsco took the runway by storm through creatively showcasing their collection during @tempefashionweek⚡️See more visuals of this revolutionary brand on our blog via photos from @rindstudio!❤️‍🔥❤️‍🔥
ICYMI: @tempefashionweek exhibited various styles of clothing from ball gowns to swimsuits, but @laboratory.official showcased the true essence of street style on the runway Saturday, Oct. 2🚧❤️‍🔥 Read @alexiswatkins__ story about this designer on our blog!
ICYMI: @phoebebridgers debut album ‘Stranger in the Alps’ turned 4 years old on Sep. 22. 👻 Read @aabigailgisela’s review about this haunting album on our blog!
Designers like @alexandrevauthier ruled the digital runway this year by showcasing their new collections online💻 Check out @camrynmclen’s story on how Vauthier’s digital show was done differently on our blog at the link in bio!❣️
Have you played your cards right and read the October issue of The Chic Mag?♠️ Check out the link in our bio to get the scoop on all things music, from fashion in the industry to highlighting Latino artists for Hispanic Heritage Month!🎸❤️‍🔥
Read about @tempefashionweek’s key makeup artist @glambi_mua and her business @glambicosmetics on our website by @laurenjlippert 💋
Who’s ready for @tempefashionweek tonight? Here’s a sneak peek of some designs from @christineadar 🙈 Make sure to follow us for more coverage and check out our website for an intro on the models at tonight’s event!
Meet your chic exec 😎✨ Check out our tags to find out a little bit more about us!