If you are a fellow pinner like myself, you understand that there are some ridiculous things that come through your feed. Since there are so many options for supposed “miracles” or projects “so easy you can DIY!” I thought I would try some for myself. Any girl who has a Pinterest account has scrolled through the Hair & Beauty section at least once. And more often than not, there are some crazy looking nail tutorials that pop up on your screen. So, I figured there was no better way to start testing the Pinterest phenomena than to get my DIY at home manicure on!

Galaxy nails: something I’ve seen done multiple ways on my many explorations through hair & beauty on Pinterest.

Here are all the polishes that I used to try and recreate this look.:

I started by taking off my previous nail polish and filing my nail to get them ready to paint. Then I painted my nails with black and pink.

The black nail polish has silver glitter flecks in it, so I thought it would be perfect to act as little stars in my galaxy!

After those coats of polish dried, I started the process of creating my “galaxy”. In order to create the effect of the combination of the different colors, I used a make up sponge. It helps if you tear the makeup sponge to reveal the rough texture like this:

This rough texture will give a better overall effect than using the smooth side of the sponge. I then dipped the sponge into white nail polish, and pressed the sponge on to my nails:

I then repeated the sponging step with the two purple nail polishes, and the blue nail polish to try and add dimension. Note: Try and have as little of the nail polish on the sponge as possible, because I sometimes had too much and the colors didn’t blend too well.

Once the polish is dry, it’s time to add the “stars”! I used the end of a bobby pin to dot stars on to my nails: 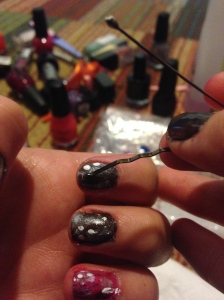 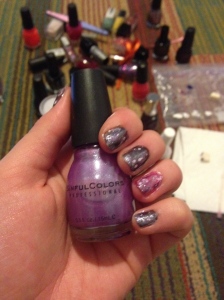 And, as a finishing touch, I used a shimmer polish on top to add even more stars to my galaxy! So, as you can see my nails did not exactly turn out like I hoped. They’re a little messy and don’t quite look like the picture from Pinterest. I think the “stars” would have turned out better if I had used a toothpick instead of a bobby pin, as I think the size ratio would have been better since my nails are smaller. I might try this tutorial again to see if it takes practice, because I think galaxy nails look so fun! If you have any suggestions, or something you’ve seen on Pinterest but have never tried, post or comment below! Thanks for reading, and keep pinning!

Photos and Article by Courtney Mally